On Saturday, February 16th, the Blue Angels Dance Team competed at the Nebraska Cheer and Dance State Competition in Grand Island. The Angels performed two routines, a Pom routine and a High Kick routine. The routines are scored on many varying elements by a panel of professional dance judges who evaluate them on a 100 point scale. There were 13 teams in the Pom division and 8 in the High Kick category.  The kick routine was choreographed by former Blue Angels members, Jenna Karlin and Jami Watts.  The pom routine was choreographed by Cayla Berry.

The girls brought home state championships in both Pom and High Kick.

This is the sixth year the state Cheer and Dance Championships have been held and the Blue Angels have brought home trophies every year, including first place finishes the last four years. The Angels got their first double championship last year, also in Pomand High Kick. This year, the Blue Angels’ High Kick routine came in first place by a whopping 6.3 points! Not only did the Blue Angels win class C; their scores in both pom and high kick would have placed them first in Class B and Runner-up in Class A! 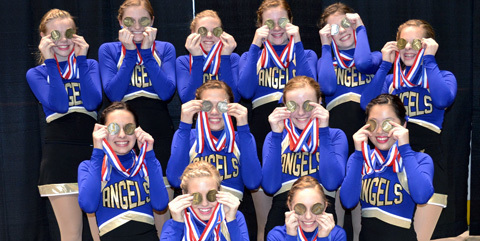