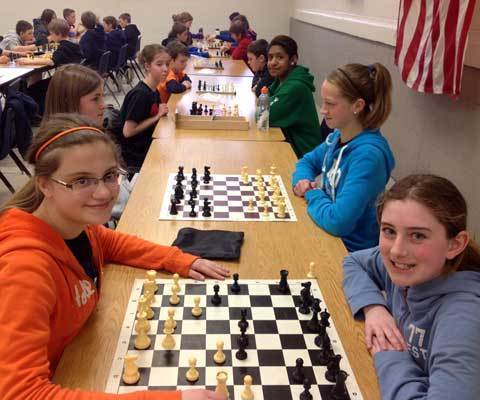 "The tournament, the move, everything was really, really fun, and I had an awesome day." --Shania Kond

On March 24th, while the 8th graders were in Kansas City, Mr. Sommerer with help from Mr. Neidermeier, Mrs. Stahr and Mrs. Jank took the 7th graders through a series of activities that lead up to our 12th annual chess tournament.

After a devotion and some warm-up activities the 7th graders watched the movie Searching for Bobby Fischer. It's a great movie that really captures the 7th graders attention. It piques their interest in chess, but doesn't require any actual knowledge about how to play chess. It's one of Mr. Sommerer's favorite movies. He highly recommends it.

After the movie Mr. Sommerer introduced the 7th graders to the chess pieces (it looks like a complicated game, but there are only 6 different pieces). They play little games with the individual pieces to become familiar with how each piece moves before playing a full games. The 7th grade guys always point out that the king is the most important piece. The gals counter with, "yeah, but the queen is the most powerful."

"I loved Chess Day because it is one of my favorite board games . My favorite part was the movie." --Jackson Latova

Learning chess also requires some one-on-one instruction. The teachers couldn't do this alone; luckily every year just about half of the 7th graders already know how to play, so when we divide up into pairs. It is always one person who knows how to play and one who doesn't know --or maybe just isn't that comfortable with the game. The experienced students know that their job isn't to win the game; it's to make sure that their partner can win in the tournament.

"I thought it was fun; more fun than I expected." --Ella Wallace

After lunch we hold a chess tournament. A normal tournament with brackets would mean that some students would only play 2 games, so instead we do a sort of round robin tournament. But we don't do a real round robin tournament because then you would have to wait around for your next opponent to finish. Instead we divide into two levels: everyone who knew how to play before our chess day in one group and everyone who just learned how to play in another. The 7th graders can play anyone in their group. When they finish a game they report who won and who lost. Then we enter that information into a computer program and they go find someone else from their group to play. At the end of the tournament the computer program looks at who beat who and determines the final ranking (the program is modeled after college football standings). Everyone got to play at least 4 games and one person played 9 games.

This year in the group that already knew how to play chess our tournament leaders were:

Among our new chess players our tournament leaders were:

Why learn chess? Chess is not only fun to play but has many educational benefits as well. Chess helps to develop pattern visualization, patience, memory, abstract reasoning, originality and creativity, awareness of the consequences of actions, concentration and focus. Not only that, studies show that students who learn how to play chess perform better in math (which makes sense) and in English (go figure).

"It was fun to play against even competition instead of my sister or brother." --Thomas Otte

All of the students at Lincoln Lutheran who attended in 7th grade have learned how to play chess. If you haven’t had a chance yet, it might be fun to ask your son or daughter to play a game of chess. If you don’t know how to play (or if you’ve forgotten) you could ask them to teach you. And don’t feel bad if they beat you. Some of them beat Mr. Sommerer too. If you don't have a chess set, we do a group order from a chess wholesaler each year for the nice quality sets that the 7th graders used in their tournaments. By ordering as a group we get prices that are less than half what you can get in other places. All of the 7th graders have order forms; see Mr. Sommerer if you would like one.

"I liked the tournament because it was really fun, and no one could beat me." --Noah Atterbury