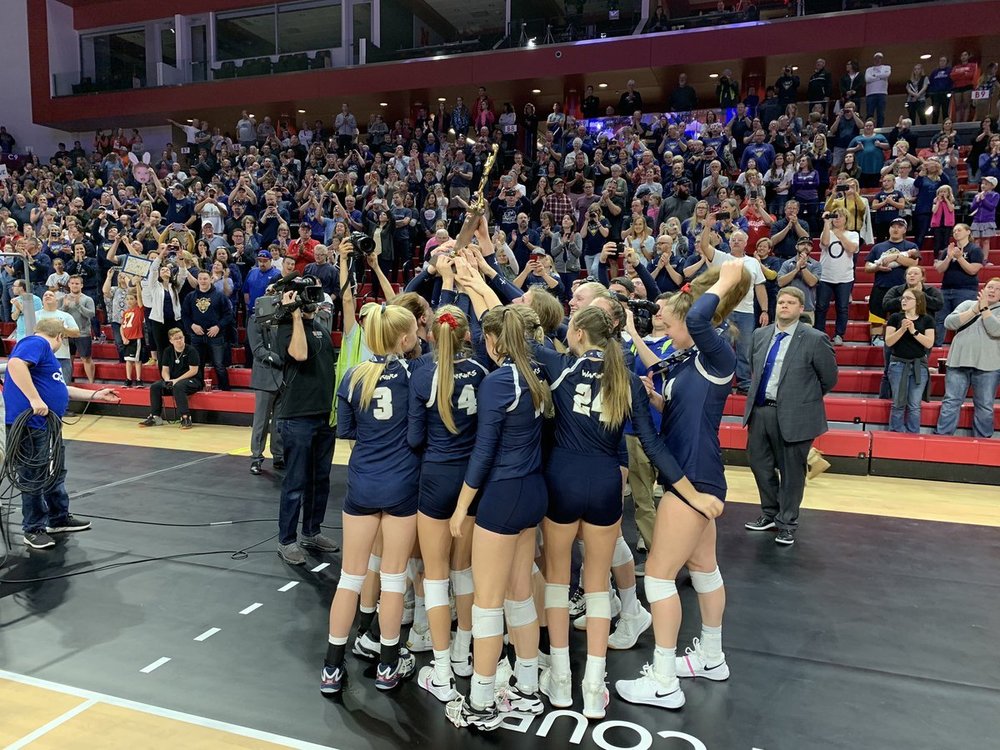 The Warrior Volleyball team has earned the honor of becoming the 2019 NE Class C1 State Champions by defeating previously undefeated St. Paul in the finals of the State Championship match on Saturday, Nov. 9 at the Devaney Center in Lincoln. To get there the #3 Warriors needed to defeat #6 Chadron in the 1st round of competition. Even though the team took a commanding lead in all 3 sets, their opponents tried to make a come back, but fell short to our Warriors by scores of 25-20, 25-15,and 25-19. Marriah Buss led the team with 20 kills, Abi Wohlgemuth added 9 kills, Paige Trutna had 22 set assists. As a team we had 9 ace serves.
The win advanced the Warriors on to the semi-finals at Pinnacle Bank Arena, where they would be up against the #2 Wahoo Warriors, who were trying to defend their title for the third straight year. But our LL Warriors did not want the same outcome as last year, after suffering a 5 set loss to them in the Championship in 2018. Lincoln Lutheran came out strong and played one of their best matches of the season, in a very balanced attack and with great serve receive and an amazing .455% hitting efficiency to take down Wahoo 3-0 in sets the sweep by scores of 25-20, 25-15, and 25-19. Molli Martin put up 5 blocks, Marriah Buss had 19 kills, followed by Abby Wachal with 10 kills. Ashlyn DeBoer put up 20 set assists for the match.
This took our Warriors to the Championship match for the second year in a row. In the first set against the #1 St. Paul Wildcats, the Warriors saw our lead get diminished and eventually lost that first set 27-25. But our team battled back and won the second set 25-20. The third set was a nail biter, as it took our Warriors to a score of 30-28 before taking set three. The team played "relentless" and kept fighting to the finish as they had the Wildcats on the ropes, Warrior Abi Wohlgemuth stuffed their attack, causing the opponents to burn their final timeout. With our Warriors leading 22-19, Paige Trutna continued with her tough serving and fittingly ended the match with an ace serve as Lincoln Lutheran would take the title by winning the fourth set 25-19! Marriah Buss put down 27 kills, followed by Abi Wohlgemuth with 9 kills, and libero Lexie Kreizel helped on defense with 31 digs and Molli Martin with 5 blocks. The team had 11 ace serves, 5 by Paige Trutna, who also had 24 set assists. What a great finish to the Warrior season, setting a new school record of 37 wins, and only 3 losses. To God be the Glory!