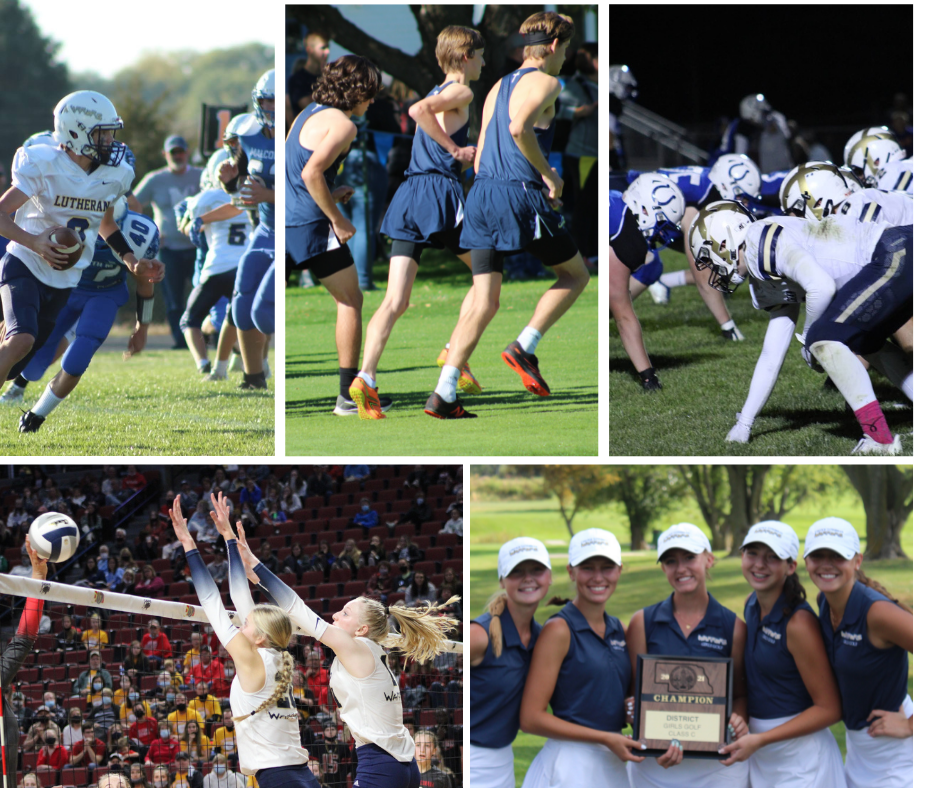 The fall sports season came to an official close on Saturday (11/6) and we wanted to take a moment to do a little review and send out a HUGE congratulations to all our fall athletes as we had some pretty remarkable and noteworthy achievements this season!

Let's take a look at all our Middle School and High School teams in the order of their season's completion.

HS Girls Golf - another strong season for the Warrior Girls Golf team with another team qualification to the State Tournament! The team finished in 3rd place at State and were District Runner-Ups! The team had a number of "personal best" performances and were led by Seniors, Mallory Schmidt (shooting a personal best at Districts) & Rachel Volin ( 2nd place finish at Districts & 8th place finish at State).

MS Volleyball - Both and A and B teams had great seasons! Both teams' seasons came to a close at the Middle School State Lutheran Volleyball Tournament hosted by Lincoln Lutheran each year. With 27 teams, competing from grades 5-8, the LL Warriors A team won the A-1 Division and the Warriors B team got Runner-Up in the B division. The A team finished the season undefeated! Well done ladies!

MS Football - in one of what Coach Wieting classified as, "the toughest scheduled season I have seen since I have been here", the Warriors Middle School Football team ended their season with a record of 4-2. A season filled with some tough losses as well as some really remarkable wins, the team showed a lot of hard-working mental strength!

HS & Middle School Cross Country - With one of the largest Middle School and High School Cross Country teams, this year the Warriors made large strides in the world of Cross Country. The season was filled with lots of personal bests and school records broken - and re-broken! In the end, the High School Boys team finished in 3rd place at Districts which qualified the entire team for State! The High School girls (small but mighty) were led by Senior Noel Steinbauer. Freshman standout, Sawyer Benne, qualified for State and finished her year breaking her own school record and finishing 20th at the State meet. The boys' team also had many personal bests and finished 8th out of 15 teams at State, led by Logan Lebo's 13th place finish.  The boys' team was led this year by seniors Ben Blankenbiller, Trey Glines, Brooks Guyton, Jonny Langewisch, Alejo Nelson & Quan Nguyen.

HS Football - The High School Football team had a great season finishing up with a final record of 8-3. They completed their season with one of the best Warriors seasons on record achieving the 5th playoff win in school history & winning a birth into the quarterfinals for only the second time in school history! The team was led by seniors: Max Bartels, Josh Duitsman, Jack L'Heureux, Eli Schleicher, Cole Seeba, Luke Stroud and Aden Zager.

HS Volleyball - All three of the High School Volleyball teams had solid seasons with the Freshman and JV teams finishing their years with winning records. The Varsity Volleyball team had a great season finishing the year 34-2 with the only two losses coming from top-ranked Class B schools. They won both the Centennial Conference Tournament (known colloquially as mini-state as it has tended to be a glimpse at the competition at the State Tournament) as well as the C1-4 District Championship!  The Varsity team had a very strong competition throughout the season which had them facing some really tough teams with the Centennial Conference teams making up 4 of the top 8 teams at the State Tournament! The pinnacle of the season came with a huge win over fellow Centennial Conference school Kearney Catholic for the State C-1 Championship! The team was led by seniors: Shanae Bergt, Ashlyn DeBoer, Raegan Holle, Molli Martin, Katelynn Oxley, Lily Psenick & Adrianna Rodencal with senior exchange students Jenny Vetvik and Synove Winge playing on the Reserve team for their first time playing the sport!

Congratulations to all our Warrior Athletes! You were wonderful leaders both on the court, field & course, as well as in the classroom. WE ARE -- WARRIORS!!